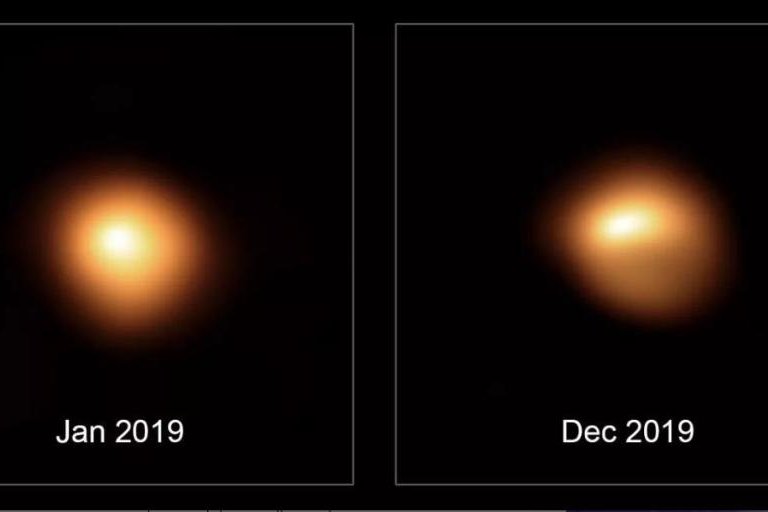 Feb. 14 (UPI) — The Orion constellation star Betelguese is not only dimming but changing shape, photographs revealed on Friday by the European Southern Observatory indicate.

The supergiant star, under observation since December by the Sphere instrument of the ESO’s Very Large Telescope facility at the Paranal Observatory in Antofagarta, Chile, began to dim in 2019 and is currently at 36 percent of its normal brightness.

The new images indicate that its irregular shape is changing as well. The star, 700 million light years away, also pulsates like a beating heart, and periodically changes in brightness, but the recent decline in brightness is unprecedented.

While it could be reaching the end of its lifespan and about to spectacularly explode, a dramatic phenomenon known as “going supernova,” astronomers have other explanations.

“The two scenarios we are working on are a cooling of the surface due to exceptional stellar activity or dust ejection towards us,” said ESO astronomer Miguel Montargès in a statement. “Of course, our knowledge of red supergiants remains incomplete, and this is still a work in progress, so a surprise can still happen.”

A December image shows infrared light emitted by the dust, formed when material is shed into space, surrounding the star.

“Over their lifetimes, red supergiants like Betelgeuse create and eject vast amounts of material even before they explode as supernovae,” said Emily Cannon of ESO. “Modern technology has enabled us to study these objects, hundreds of light-years away, in unprecedented detail giving us the opportunity to unravel the mystery of what triggers their mass loss.”

The death and disappearance of Betelgeuse, if it has begun, could take up to 100,000 years, though.

The star is currently “the least luminous and coolest yet measured from our 25 years of photometry,” astronomer Edward Guinan of Villanova University said.